Choosing the right cabin on a cruise ship

First of all, the predicate “best cabin” cannot be awarded on a flat-rate basis. What is good and what is not depends on the personal requirements of the travellers and the travel budget. However, there are some pitfalls that can be avoided when choosing a cabin. On cruise ships, a basic distinction is made between inside, outside and balcony cabins as well as suites. Since the choice of cabin is a considerable feel-good factor on your voyage, you should pay special attention not only to the type of cabin but also to the location of your cabin.

On ocean cruisers, the windows of an outside cabin cannot be opened without a balcony. Ventilation and the brief snatch of air before going to bed are not included here. In addition, visibility may be obstructed by lifeboats, for example. It is advisable to clarify this before booking. If you are prone to seasickness, it is a good idea to reserve a cabin horizontally and vertically in the middle of the ship. There is far less movement in the ship’s core than at the bow or stern.

Those looking for peace and quiet should avoid cabins around hotspots such as reception, restaurants, fitness centres or discos. Away from stairwells and lifts, those who don’t want to be woken up by nightly party-goers will sleep well. At the same time, however, this means that longer distances, e.g. to a delicious (breakfast) buffet, are often to be accepted. Long corridors mean long walking distances. The positive: the “compulsively prescribed” movement is sometimes quite sensible for the fabulous meal on a cruise ship. With a cabin under the sun deck, it can happen that the background noise generated when the deckchairs are set up in the morning makes for a sudden start to the day. This also applies to cabins under the jogging track or the volleyball court. During the day there is little peace and quiet here. In addition, a massive wall provides more peace and quiet than a cabin with a connecting door to the neighbour. The rattling of the anchor chain and bow thruster as well as vibrations of the ship’s propeller at the stern bypass guests with cabins in the middle of the ship. 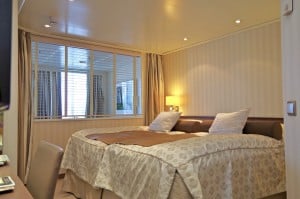 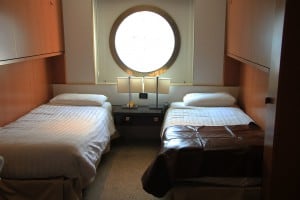 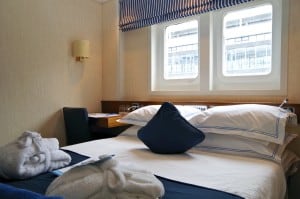 View into the starry sky?

When choosing a balcony cabin, please note that other guests may have a view of your balcony from the sun decks or slanted parapets of their own cabin. The same happens with stepwise balcony cabins at the rear. If upper balconies protrude beyond the lower decks, the view into the starry sky is missing and the sun tan is also gone. Caribbean cruisers may also appreciate the shade gained. On lower decks towards the bow there are often no glazed balcony fronts, so that the sea view from the sun lounger is omitted. Those who are free of vertigo, want to enjoy a fantastic panorama, appreciate short distances to the pool and the sun decks as well as have a higher budget at their disposal can book smart on the upper decks.

In the case of stern balconies on older ships, it is advisable to inform yourself about the soot emissions of the ship. Even if it brings luck, the small piece of soot on the balcony is one of the inconveniences of a sea voyage. The same applies to the strong wind that acts on bow balconies and any adjacent smoking areas. On the lower decks near the ship’s exit it can happen that guests are stowed away during shore excursions and blocked paths cause breakfast frustration.

Our tip: Whether from your own experience or from stories – the above-mentioned aspects are familiar to many cruise guests. It is therefore advisable to book your cruise as early as possible. The choice of free cabins makes it easier for you to bring in your ideas and wishes as well as possible. First of all on board it becomes difficult or even impossible to change a cabin.

Our conclusion: Each cabin has its advantages and disadvantages. Quietly located cabins often entail longer walking distances, centrally located cabins minimize the risk of getting seasick. Based on the deck plans of the individual shipping companies, you will quickly find the ideal cabin for a relaxing cruise.

Our idea: Well prepared to set sail? Can you have a say, be informed and skilfully avoid wordplays? You won’t miss a thing with our extensive ABC cruise.