Beauty on more than 100 islands

One of the most romantic cities in the world is considered a wonderful open-air museum. Winding lanes, historic buildings, numerous art treasures and the ubiquitous Grand Canal with its countless bridges make up the very special charm of the lagoon city, which has been a UNESCO World Heritage Site since 1987.
But if you really want to experience Venice, you have to do more than just a day trip, because in Venice the countless palazzi and museums are not enough, as you also need to experience unforgettable moments like the carnival, a romantic gondola ride or the sunset on the lagoon islands. 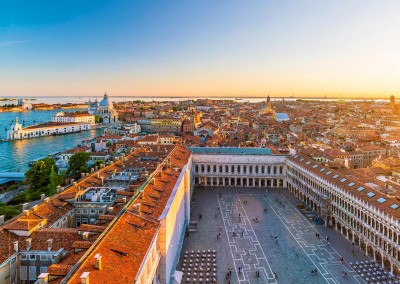 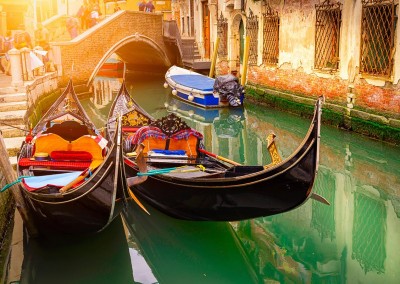 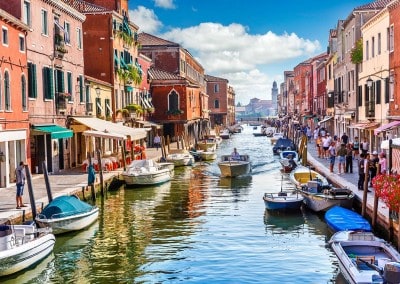 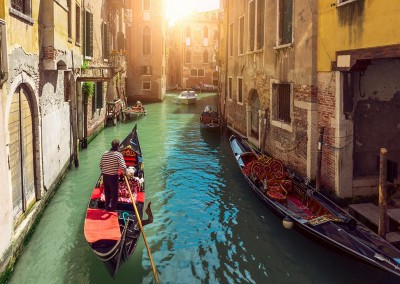 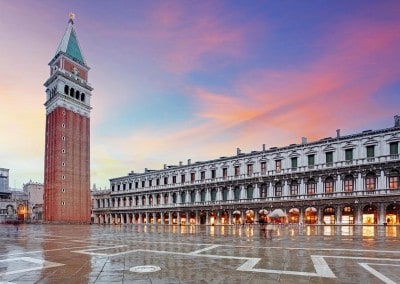 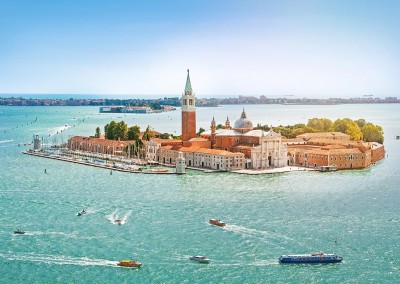 Advertisment
The northern Italian town is considered the most beautiful car-free zone worldwide. Travelers can park at Piazzale Roma ant then take the vaporetto to the Grand Canal, the four-kilometre main waterway. However, the most magical arrival is by train, which stops at Santa Lucia station. When the station doors open you are right on the Grand Canal. Once in Piazza San Marco, you have reached the vibrant centre of the capital of Veneto. But not only here a unique magic awaits you!
Its thousand-year-old city is worshiped by the Venetians as La Serenissima - the most serene, once built on the canal of Guidecca. In the approximately 3,000 alleys you should be well on foot true to the motto "The early bird catches the worm." Because the city on the Adriatic Sea is most beautiful in the soft light of the sunrise, which shimmers the façades of the Palazzi golden. The best starting point for your exploration tour is the St. Mark's Square. Early birds can look forward to a truly unique experience, because shortly after sunrise, they share the almost deserted Piazza San Marco with only a few locals who sip their espresso while going to work. Three other places worth visiting on the square are the Doge's Palace, St. Mark's Basilica and St Mark's Campanile.

Art and culture make you hungry. So it's a good thing that there are a lot of gourmet temples in Venice, which are especially known for their fish specialties. Those who want can indulge in delicacies such as deep-fried mackerel with onions, pine nuts and raisins (sarde in saòr), "risotto nero", which consists of black rice with squid cubes or bigoli noodles with anchovy onion sauce. Maritime specialties like these are best enjoyed in quaint restaurants like Da Alberto, La Palanca or Do Mori at the Rialto fish market. Incidentally, the latter has been around for over 500 years. If you do not like fish, you can try specialties such as polenta with veal ("spezzatino"), a fresh radicchio salad or the beloved carpaccio to get the strengths to embark on more adventures.
The Caffè Florian opened in 1720 in the Piazza di San Marco and is probably the world's oldest coffee house. And those who consider the price as a museum entrance fee understand. Goethe, Wagner and Hofmannthal were guests too. Tip: It´s better to sit inside than outside. Away from the hustle and bustle, well hidden in the tiny alleys, you can find the typical Bácari, which owe their name to the wine god Bacchus. A culinary paradise is also the delicious homemade cicchetti. Each Bàcaro has its own specialties, especially when a „Mamma“ takes care of the loving preparation. Delicacies like tramessini or pickled sardines are the perfect appetizers. To top it off, drink an Ombra, a sip of cool red or white wine.

Book a flight to
Venice now.

Book a hotel in
Venice now.

Book a car
in Venice now.

With this typical exclamation, the Venetian gondoliers offer their services in their black, elegant gondolas. On the Grand Canal in the heart of the lagoon city, romantics can enjoy a unique gondola ride through the labyrinth of canals. If you desire, you can also get a serenade from the gondolier in striped shirt and straw hat. 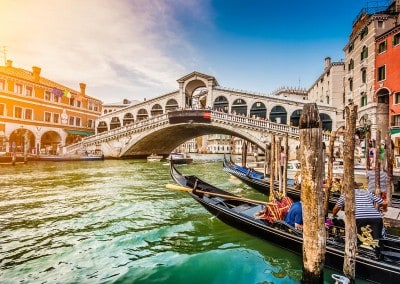 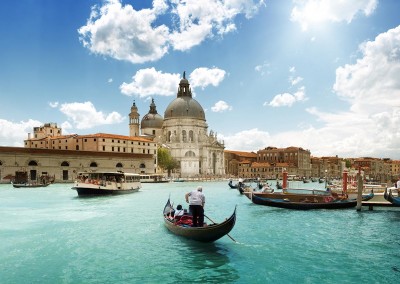 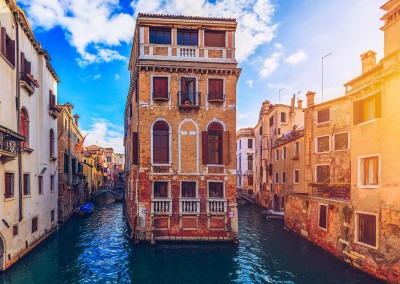 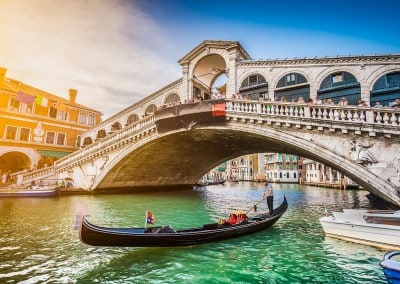 © canadastock / shutterstock.com
If the Cologne carnival is too much for you, you should visit the lagoon city for the legendary Venetian carnival in February. If you are looking for the always same stuffed tigers, jet pilots and pirates, your search here is in vain. On the contrary, the Venetian carnival has retained its aristocratic and at times somewhat wicked character since its origins in the 12th century. Stylishly dressed locals and visitors cavort and enjoy together music and dancing in the festively decorated lagoon city, especially in St. Mark's Square. The highlight of the carnival is undoubtedly the imposing fireworks, which illuminates the ancient façades with a very special light and takes you to the long-gone era of the Renaissance. To get deeper into the atmosphere of the Venetian carnival you should definitely use a real Venetian mask.
These are available in special shops such as the Tragicomica, the Fondamenta dell'Osmarin and the Misterio Buffo. But do not forget your rubber boots. Because despite carnival and wintry fairy-tale scenery, nature tends to temporarily set the lagoon city under water. But the joie de vivre of the Venetians does not detract from this. If necessary, they also dance in rubber boots on St. Mark's Square.

At the gates of Venice

Most holidaymakers only visit the two-part city Island with the probably most famous sights. But this is a big mistake, because especially the smal neighbouring Islands in the lagoon hide one or the other's insider's tip.
First and foremost is Isola di Murano, famous today for its glass art. You should definitely visit the glass museum. Worthwile is also a visit to Isola Burano, which with its colouful fishermen's huts belongs to one of the most colourful places in the world. To discover Murano glass and Burano tip on the neighbouring islands, you can use the water bus at the Cemetery island of San Michele. Only Venetians who have lived in the city for at least five years find their last rest here. In addition to the great variety of colours of the tombs, the archway opening, the only opening in the wall through which the ashes of the deceased can be scattered as desired in the lagoon, is particularly worth seeing. Not far away is the lesser-known island of Torcello, which is very calm. It gets vivid ony during the film Festival, when the rich and famous meet in the restaurant Locanda Cipriani. Would you like to take part?
powered by 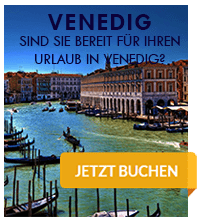